Written in 1988 for the internal newsletter “The Tickler” by then co-op member Hugh McKay who lived with his family at Amicae from 1987-1997.

The Beginnings of Amicae 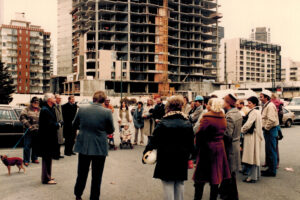 As someone who has only recently joined the Co-op, I had wondered about the Co-op’s beginnings.

An evening’s conversation with Eleanor Cornish filled in most of the details of the “early days” for me. Eleanor is the only one of the founding members who is still a resident and member of Amicae.

In 1982, a group of six people had been meeting informally with the idea of starting a co-op that would be situated close to the city’s downtown core, and one in which the members would have a significant voice in both the running design of the facility. After a series of discussions, the Amicae group decided to approach B.I.L.D. (Building Independent Living with the Disabled) and ask this organization to act as resource and a partner in· achieving their goals.

B.I.L.D. agreed to do this and wanted Amicae to adopt, as a condition of their participation, that 30% of the suites were to be occupied by the disabled, and would be wheelchair accessible. The six members all agreed to this first official step occurred on October 7, 1982, when Amicae Co-op was formally incorporated.

B.I.L.D. were then able to provide experienced guidance in approaching both Vancouver City Hall and CMHC ( Canada Mortgage and Housing Corporation). 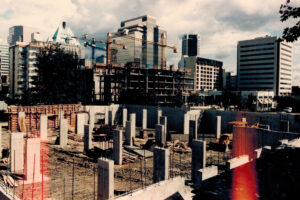 The project is well underway.

It was suggested that the City of Vancouver be approached with the idea that they purchase a lot of land in the West End and lease it back to the Co-op. At approximately the same time, a proposal to CMHC was being planned. Each year, CMHC supports a certain number of housing units across Canada, and only a certain number. If CMHC approves of a given project, their role is to then guarantee the mortgage which the co-op undertakes with the appropriate financial institution.

On January 22, 1983, a delegation from Amicae met with City officials and presented their proposal. There was immediate and unqualified support from the officials–it now remained to select an appropriate site.

Several months later a worker from B.I.L.D. decided on a direct and practical approach–he got into his car and drove all around the West End for several hours, scouting possible locations for the Co-op. He saw the lot, which is now 1047 Barclay, and liked what he saw. The lot at the time was an excavation owned by the developer, Markland Properties, who had planned a private development for the site. Since the Real Estate market was in the middle of a sharp decline at this time, these plans had been set aside for the time being. The B.I.L.D. worker reported back to the growing membership of Amicae (now 14) that they ought to ask City Hall to buy this lot. This was agreed to at once, property was purchased from Markland as a Turnkey Project.

In a Turnkey Project, the buyer agrees that, as part of the purchase, the previous owner will act as a developer of the property for the new owners, and in this case, would act as a builder on the project, through its subsidiary construction company. 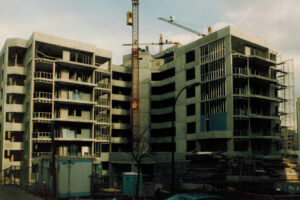 The main structure is complete!

The land cost at the time was listed at $975,000, and with the holding costs, came to a million dollars.

In September of 1983, CMHC announced that they would guarantee the requested unit allocation of 56 suites. This enabled the Co-op to go to Morguard Trust Co., and proceed with the acquisition of the mortgage.

As a result of this, an agreement was reached involving Amicae, CMHC, Morguard and Markland, giving Amicae a 40-year lease on the land, with an option for a further 20 years.

Immediately prior to the Ground Breaking Ceremony in January, 1984, the total estimated cost of the project was set at $4,763,000. The proposed contract price with Markland was $3,330,000.

Construction began in January, 1984, and lasted 18 months. The first official resident of Amicae, Jackie Sinclair moved in on June 23, 1985. For that first night, she shared the large empty building with only a security guard as company. Within a week, however, 60% of the suites were occupied. This number grew until the present 100% was reached.

The days following the groundbreaking were not without heated discussion, controversies and problems. In the next issue of the Tickler, I’ll go into a few of the growing pains the Co-op experienced in its development from excavation to our present home.